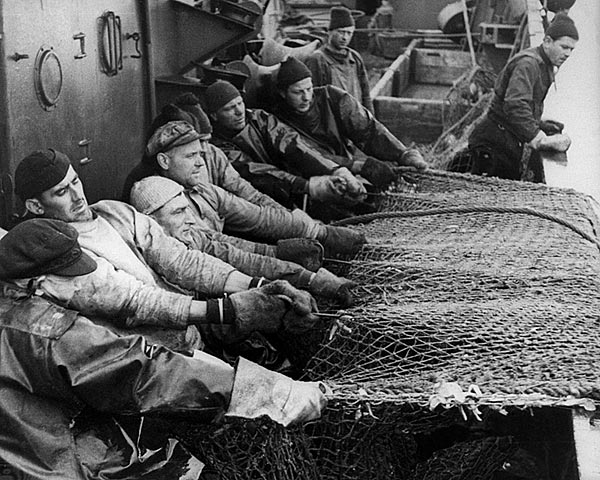 After some six to eight days at sea, the side trawler reached the fishing grounds where the net was let down: first the mesh bag, then the cod end and finally the rest of the net. The trawler would then gradually pick up speed again and trawl the net along the seabed, generally for about two to three hours. Then the net was hauled back on board with the help of a winch until the trawl boards were hanging over the gallows.

Using sheer physical force, the crew would pull the cod end over the side bulwark so that it could be heaved on board using the winch. This was an extremely arduous task as the crew had to haul in the net with their bare hands or with a net hook. It was hard and dangerous work even in good weather conditions. When the net was finally up on deck, the bosun would open it up and the fish poured out onto the deck.

Gutting the fish was a particularly time-consuming task. They were sliced open on the underside and the guts extracted. After being carefully washed they were let down into the fish hold through hatches and laid out on ice. This had to be done very quickly because in good fishing grounds the net was let down again before the gutting process had been completed. If the net was torn or broken, it had to be repaired under great time pressure and then let down again.