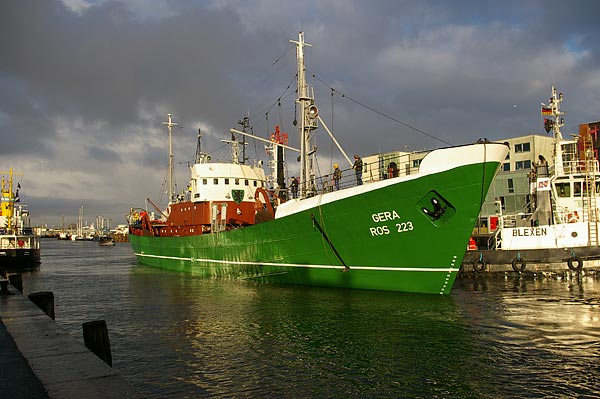 The “GERA” was built in 1959/60 along with four sister ships in the Peene Shipyard in Wolgast and and was commissioned in 1961 for the Rostock Fishing Combine. 1961 was the last year in which side trawlers were taken into service, both in East and West Germany. After this they were replaced by the modern stern trawlers. The “GERA” therefore represents the last generation of side trawlers, vessels that look back on a long tradition all over the world.

Weighing 943 GRTs, 65.55 metres long and 10.32 metres wide, the “GERA” was technically very advanced and equipped with the latest technology of its day, representing the end of a long series of developments. It is fitted with a 1420 BHP father-and-son engine which was state-of-the-art at the time. The 34-man crew lived in single and double cabins in the after-body. The fish grinding plant and the liver-oil extraction unit were also new technological developments at the time. The “GERA” is very similar to the side trawlers that were once used in Bremerhaven, both in design and appearance.

Initially the “GERA” mainly sailed to fishing grounds off Western Greenland and Labrador which were very profitable for quite a few years. From the end of the 1970s, however, the “GERA” and its sister ships were only used as transport and supply vessels for the East German fishing fleet. The “GERA”s last voyage was as a feeder vessel to Mauretania in March 1990. In June 1990 the Historisches Museum Bremerhaven bought the last remaining German side trawler and saved it from being scrapped in Portugal. The last crew of the “GERA” brought the ship together with all its equipment to Bremerhaven where it has been berthed in the old fishing harbour ever since.