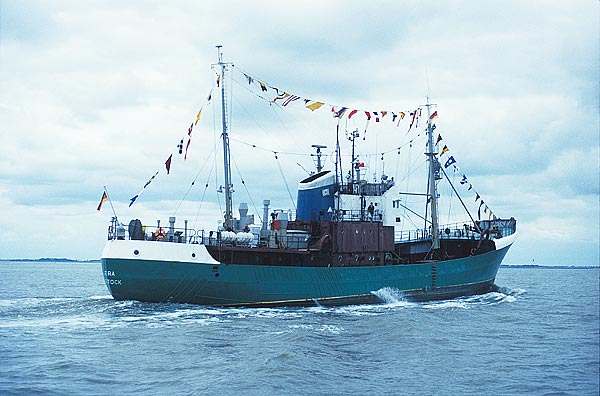 In Spring 1990 Reinhard Meiners, then the managing director of the Bremerhaven company responsible for operating and developing the old fishing harbour (FBEG), discovered an old side trawler at Rostock Fishing Combine. At the beginning of May in the same year, the “GERA” underwent a first inspection in which the condition of the ship was assessed. In view of Rostock Fishing Combine’s plans to scrap the side trawler in order to reduce its number of ships, speed was called for.

At a meeting on May 30, 1990, Bremerhaven City Council voted unanimously to acquire the “GERA” as a museum ship for the Historisches Museum Bremerhaven (then still called: Morgenstern-Museum). The Friends of the Morgenstern Museum and the Bremerhaven Maritime Historical Association paid the costs of the transport.

On June 15, 1990 the “GERA” was greeted in the offshore terminal in Bremerhaven with all maritime honours. During the voyage from Rostock to Bremerhaven the purchasing contract was concluded and the “GERA” acquired by the city of Bremerhaven as a museum ship for the symbolic amount of DM 1.00.